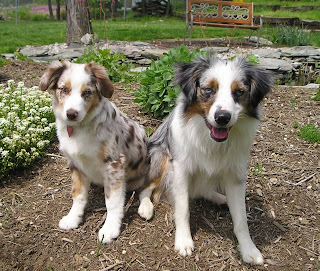 My oldest son was ten when we got our first dog. He and his seven-year-old brother had to write a paragraph for my husband about how they would take care of the dog and pick up all the poop in the yard. Our first dog was a pretty good fit for our family, but my husband never really liked him.

Several years later we dog sat for some friends of ours. She was a cute little Westhighland terrier. She had a very different personality from our beagle, and she did all kinds of tricks. The kids and I had a great time with her. Then it happened. I can still remember sitting in the living room and overhearing a conversation in the kitchen. A child said, "Daddy, do think we could get a second dog?" I was thinking, "You don't know what you're asking. There is no way." Then dad says, "I would consider it." My jaw dropped. I realized he actually enjoyed the dog we were watching.

To make a long story short, we ended up with two dogs. Our beagle is gone, but we have two wonderful miniature Australian shepherds. Here's what I like about having two dogs:


Is it twice the work? No. I can walk two dogs in the same amount of time I can walk one. Feeding two dogs only takes a little longer than feeding one. You could even schedule their annual exams at the vet at the same time.

Is it more work? Yes and no. It obviously takes a little more time in certain areas. Bathing two dogs does take about twice as long as bathing one. On the other hand, because they play with each other and chase each other around the yard, we don't have to spend as much time exercising them as we would with only one.

I don't think anyone should bring a dog into their family without giving it serious consideration. It is a big responsibility. For us, it's worth it. Our dogs are part of our family. They are not treated the same as people, but they are treated with love and respect. They add a lot to our lives, and we love each of them. We also love having two.

To find out what works for other people visit Rocks in My Dryer's Works for Me Wednesday.

Comments:
We have 2 dogs as well. One was my husbands and one was mine before we married. Now we have 2 doggies and a one-year old. They are a ton of work but so much fun. The kiddo loves them and is so entertained by them!

We are a two dog house too. Our first dog had separation anxiety until we got the second dog. The male dog acts like my husband and the female dog is a lot like me.

Your dogs are so beautiful! My boys want a dog, but I'm not sure I'm ready for it yet. Wishing and dreaming...

Our fam has one cat but still love this post. hugs, Jen

Welcome! If you or someone you know is on a gluten-free diet, I hope you find hope, help, inspiration, and ideas here. I'm no expert, just an everyday cook sharing what my family enjoys.